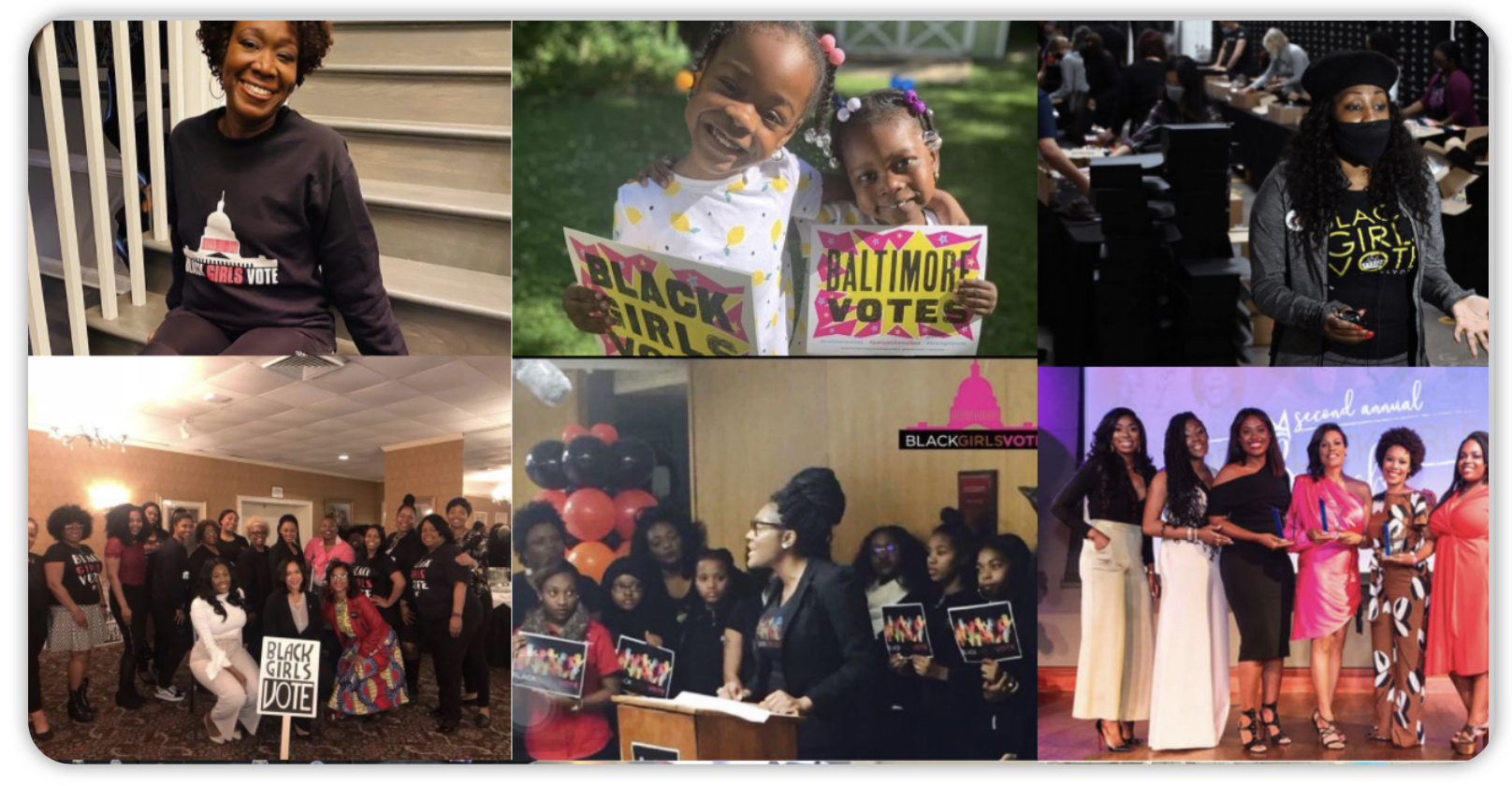 BALTIMORE, MD (June 2, 2021) — While Black women have been celebrated for their overwhelming participation in elections, the conversation around their civic engagement is often limited to the ballot box. A new report by Black Girls Vote (BGV) and the National Conference on Citizenship (NCoC) examines Black women’s impact and potential beyond elections, and calls for urgent investment in their civic health. The report uses various civic health metrics, including electoral and non-electoral civic participation, and provides a policy analysis rooted in BGV’s three advocacy areas of focus — educational improvement, economic prosperity, and healthcare access. Together, BGV and NCoC are calling for urgent policy change that will truly recognize the challenges and barriers Black women may face, and support and sustain their civic-engagement through an intersectional approach.

Danielle Miles-Langaigne, a report author said, “The civic participation of Black women and girls extends far beyond their ability to cast a vote or engage politically. Their capacity to fully contribute to civil society also rests on other matters, such as their level of access to quality health resources–or their likelihood of being excluded from educational spaces. It’s time that Black women and girls are fully heard and holistically seen by the systems they are constantly investing in.”

“Black women have a long history of being at the forefront of civic engagement efforts in the United States, consistently advocating for better outcomes for their communities and fighting for the vote,” added Hoda Abdalla, report author. “This report reveals that it is time that they are not just thanked once every four years, but that America actually shows up for Black women in the way that Black women have consistently shown up for them. This means actually advocating for policies that address income and employment disparities, fatal health care outcomes, mounting student debt, and the many other disparities affecting Black women.”

The survey data, collected and disaggregated by the National Conference on Citizenship (NCoC), provides insight into how Black women’s civic health is foundational to American democracy.

“The data shows that Black women in America lead with their vote at the ballot box, continue to make their voices heard at all levels of government, and have high rates of non-electoral participation,” said Jeff Coates, Research and Evaluation Director at the National Conference on Citizenship.

BGV is working to transform democracy with Black women at the center of civic-engagement, policy change and social impact. The organization believes that voting is a critical pathway to bringing resources and support back to Black women, their families and communities — and a means to disrupt generations of systemic injustice.

“Black women are often credited with saving this country, but are forgotten about when it comes to our broader contributions to democracy,” said Nykidra Robinson, founder and CEO of Black Girls Vote. “We hope this report helps to illuminate that civic-engagement for Black women is in everything we do and encourages those in positions of power to make the necessary policy changes to make the future better for generations of Black women to come. When Black women win, we all do.”

Both BGV and NCoC believe that Black women are essential to the future of America, but they cannot be expected to continue to contribute to society and bolster the nation without significant investment in their civic health.

To read and engage with the full report, click here.

In an effort to raise awareness about some of the barriers Black women face, BGV’s advocacy team will host a virtual panel discussion tonight, June 2 at 6 pm ET, with Black scholars focused on the burden of Black student debt for Black women. Studies show that while white men borrow an average of $29,862 in student loans, Black women on average borrow $37,558. And though women are carrying about two-thirds of the nation’s at-minimum $1.5 trillion student loan debt, Black women have the highest student loan debt of any racial or ethnic group. To attend the event, please register here. Follow the conversation on social media using #BlackWomenCivicHealth.

About Black Girls Vote
Black Girls Vote (BGV) is a national, nonpartisan organization with an objective of engaging, educating, and empowering Black women, particularly those 18-25 years old, to activate their voice by utilizing their vote. It is our mission to inspire Black women to use the political process to improve the quality of life for their families and the collective community. Follow us @BlackGirlsVote.

About the National Conference on Citizenship
The National Conference on Citizenship (NCoC) is a congressionally chartered organization dedicated to strengthening civic life in America. We pursue our mission through a nationwide network of partners involved in a cutting-edge civic health initiative and our cross-sector conferences. At the core of our joint efforts is the belief that every person has the ability to help their community and country thrive.