Black Women Did That: The Need to Invest in the Civic Health of Black Women

Black women are widely recognized as champions of democracy: turning out and organizing massive numbers of people amidst the COVID-19 pandemic. Their arduous labor did not solely increase turnout–it also reinvigorated the spirit of democracy in communities that policymakers and governing bodies often neglect.

From the work of Stacey Abrams, Latosha Brown, Nse Ufot, and countless other organizers, Black women were overwhelmingly credited for their extraordinary and monumental efforts to engage, educate, and activate Black voters. Along with the recognition of Black women organizers, the nation elected our first Black and South Asian woman vice-president–cementing Black women’s efforts to uphold American democracy in history. 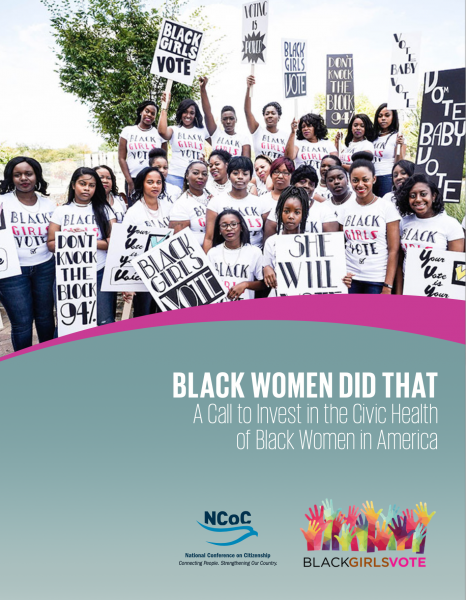 This report, Black Women Did That: The Need to Invest in the Civic Health of Black Women in America seeks to expand current discourse concerning Black women’s civic participation. Additionally, it provides policy recommendations to improve educational, economic, and health outcomes for Black women.

Black Girls Vote is producing this report to underscore the role Black Women play in our civic life and to recommend policy changes to address Black women’s unique needs. Our motivation for publishing these findings is rooted in our commitment to supporting Black women as they utilize their vote as their voice. We hope that this report further encourages those committed to community empowerment and social betterment to uplift Black women’s civic efforts. As the 2020 election demonstrated, an investment in Black women’s advancement leads to society’s amelioration as a whole.

How can you help?

Spread the word with these social media graphics.

Black women have high voter registration and voting rates. However, they fall behind in non-electoral participation, such as providing campaign donations, attending school board meetings, or calling public officials. Oftentimes calls to lobby elected officials, attend events and public meetings to advocate ignore that Black women may have other responsibilities and lack time to commit to such activities.

Black women had the highest voting percentage in local elections in 2018 (56.4%), highlighting their commitment to making their voices heard at all governmental levels.

To a significant extent, Black women prioritize political knowledge acquisition and dissemination. 71.5% reported that they frequently read, watch, or listen to news about political, societal, or local issues.

“Black women are often credited with saving this country, but are forgotten about when it comes to our broader contributions to democracy,” said Nykidra Robinson, founder and CEO of Black Girls Vote. “We hope this report helps to illuminate that civic-engagement for Black women is in everything we do and encourages those in positions of power to make the necessary policy changes to make the future better for generations of Black women to come. When Black women win, we all do.”

Danielle Miles-Langaigne, a report author said, “The civic participation of Black women and girls extends far beyond their ability to cast a vote or engage politically. Their capacity to fully contribute to civil society also rests on other matters, such as their level of access to quality health resources–or their likelihood of being excluded from educational spaces. It’s time that Black women and girls are fully heard and holistically seen by the systems they are constantly investing in.”

“Black women have a long history of being at the forefront of civic engagement efforts in the United States, consistently advocating for better outcomes for their communities and fighting for the vote,” added Hoda Abdalla, report author. “This report reveals that it is time that they are not just thanked once every four years, but that America actually shows up for Black women in the way that Black women have consistently shown up for them. This means actually advocating for policies that address income and employment disparities, fatal health care outcomes, mounting student debt, and the many other disparities affecting Black women.”

Education: Implementing alternative disciplinary practices in schools, increasing research of the incidence and effects of disproportionate punitive discipline of Black girls, and investing in Black women’s access to postsecondary education through federal funding.